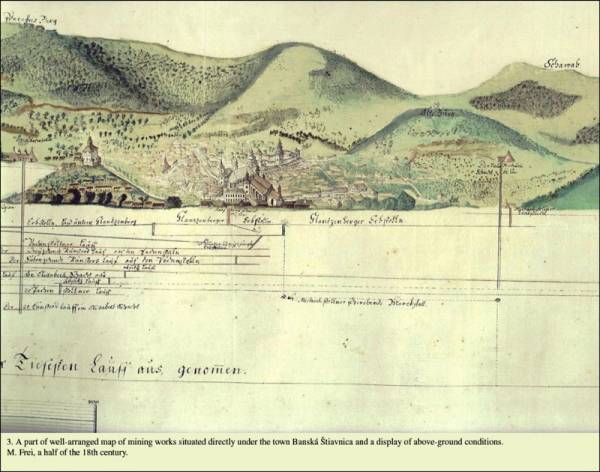 First water reservoirs were created as early as the beginning of the 16th century. Reservoir Veľká vodárenská tajch is situated just above Holy Trinity Square and serves as a resource of drinking water and water source in case of fires. However, more extensive construction of reservoirs began only thanks to the “energy crisis” in the first half of the 18th century.Mines used to be excavated manually in the past, with the help of a pick and a hammer, sometimes fire was used. In a year two people were able to excavate a tunnel of 7 metres in a rock. It is difficult to imagine in what speed they had to excavate hundreds of meters of tunnels. Thanks to the use of gun powder (since 1627) the speed of mining has increased.

As the depth of mines grew, underground water represented the biggest challenge. Even heritage mining tunnels led horizontally were not sufficient, as mines sloped down below their level. Manual pumping out by people and horses turning horse-whim was insufficient as well. The only additional known alternative of energy source was water, but there was a lack of water in the surroundings. Moreover, mines were in the mountains, so how to get water there? Rumour about these problems was spreading into the world and several inventors gathered to Štiavnica in order to construct a “magic machine”. They designed various, often very bizarre devices, but the situation did not improve. Debts of miners grew and profits decreased. Court Chamber in Vienna decided to close the mines.

The then engineer and constructor Matej Kornel Hell (1651 – 1743) opposed it vigorously. He developed a detailed plan for saving mining in the key mines; he proposed to build additional water reservoirs. His solution was nothing new, however because of the difficult geographic conditions and the acute shortage of water streams in the region, it was very daring. Nowadays it is clear that Hell was ahead of the then world water construction development thanks to his smartness and brilliance, but his proposal was rejected by the administration in Vienna. M.K.Hell fought his way with his proposal to the emperor Charles VI, who accepted his arguments and provided financial support for the plan. In three years M.K.Hell and his son Jozef Karol Hell completed the construction of the biggest water reservoir in those times, Veľká Vindšachta (1715). They increased the capacity of Evička and Spodná Vindšachta and finished the whole plan. The older Hell constructed and improved seven pumping devices in a genius way. With the help of these devices he quickly pumped out all the water from the mines which were flooded at that time. In this way, one person saved mining industry in the region of Štiavnica for other 150 years.

Hell’s construction was further developed by a brilliant mathematician, cartographer, geodesists and imperial and royal geometrician of central Slovak mining towns – Samuel Mikovíni (1686 – 1750). Mikovíni reconstructed and increased the walls of Hell’s reservoirs, designed and built new ones. He linked reservoirs into a system of water tunnels and so he enabled directing water to those places where it was necessary. He designed several kilometres long collecting and regulating ditches which were paved with stones. They led across the slopes of hills. In this way rain water was transferred to reservoirs. Thus, he completed entire water management system and solved the energy problem of Štiavnica mining up to the 20th century.

In the location where a reservoir and a dam were to be built, slopes were cleared down to rock. All the old mining tunnels were identified; they were cleaned and filled with tight clay which was rammed. The basis of a dam was created by a waterproof sealing element. Three rows of strong oak poles woven with willow twigs were embedded and the walls, which were created in this way, were filled with clay. This was made denser and rammed for instance by sheep or goat herds running through it. Subsequently earth was brought to both sides of this element. The earth was strengthened with stones from the water side and supported by a stone wall, base, from the air side. The construction was done by hundreds to thousands of men as well as women, though separately.