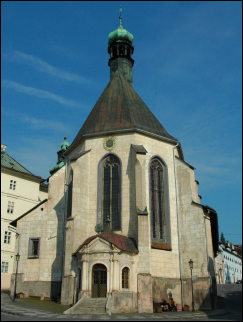 The late Gothic St. Catherine’s Church is one of the most beautiful churches in Banská Štiavnica. It is also called “Slovak”, because the sermons here had been taking place in Slovak language since 1658.

St. Catherine’s Church was built in 1488-1491. Its interior decorations were worked on until 1500. The church consists of one nave topped with a late Gothic stellar vault continuing to presbytery. The nave is lined from both sides with chapels of half its height. In 1776, the chapel of St. John of Nepomuk was added to the church. Underneath the church lies a crypt in which mayors and significant townsmen were buried. A cross, a late Gothic statue of Virgin Mary and a stone baptistery have been preserved of the 15th century furnishings of the church. The organ was handcrafted by a local master in the late 18th century. The original main altar was made by a mystical Master M.S. Two beautiful sculptures of St. Barbara and St. Catherine from the old altar can be seen in Jozef Kollár Art Gallery. Panel paintings from the original altar are scattered around the world. One is placed in a museum in Lille, France, another in the Hungarian National Museum in Budapest, four are in the Christian Museum in Esztergom and one got lost. The last painting from the precious collection – the Birth of the Lord – can be seen in a church in Svätý Anton, a small village near Banská Štiavnica.