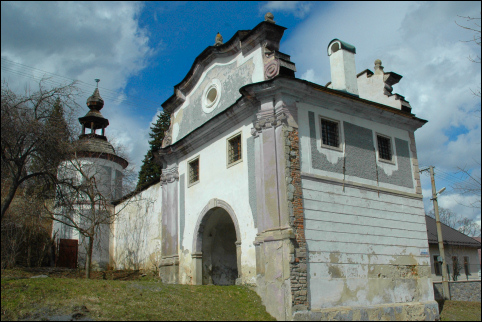 The Piarg Gate is the only to these days preserved gate from an original town fortification, which was designed by an Italian engineer Ferrabosco. Built in 1554 together with Nový zámok castle (New Castle), it protected the road to Banská Bystrica from Pukanec and from former Vindšachta.

Original town fortification was composed of a double circle fortification which was formed by joining peripheral walls of individual houses. Main communications were closed by five gates – the Gate of St. Anton, the Belian Gate, the Cilinger Gate, the gate at Kammerhof and the Piarg Gate. The Piarg Gate, which closed the entry from Levice and together with Nový zámok castle (New Castle) it protected the route to Banská Štiavnica from Pukanec and former Vindšachta, has been the only gate preserved.

The Piarg Gate was originally composed of a prismatic tower with a passage on the ground floor. It was protected by rectangular fortifications on its sides. Eastern fortification was destroyed during World War II. Two fortified towers, out of the complex fortification, serving as protection against the Turks, can be found in Štiavnické Bane. You can find Vartovka (a watchtower) in Banská Hodruša.