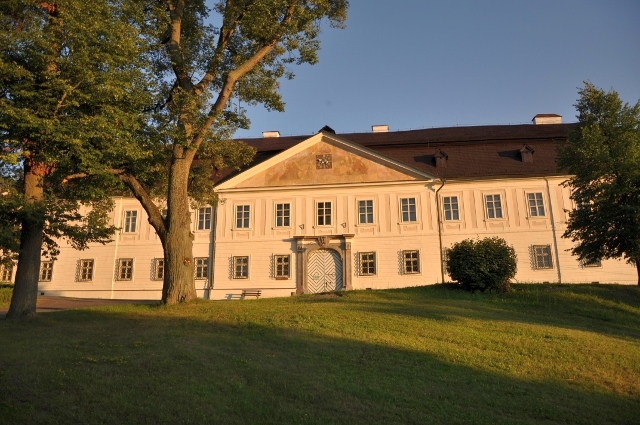 The museum in the manor house in Svätý Anton is one of the best in Slovakia. Style, elegance, balance, temperance and quality are the manor house attributes. It is a dominant feature of the municipality which cannot be overlooked. It had been owned by gentry until 1944, when Bulgarian tsar of the House of Coburg abandoned it. This might have been the reason why original wallpapers, paintings of famous painters and a beautiful and historically unique collection of antique furniture from around the world were preserved here. Its corridors are lined with old graphic works and thousands of trophies. The entire lower floor is devoted to hunting exhibition. The manor house is surrounded by the park attracting people to have a walk in any season. It is a pleasant place to rest for the whole family.

A little fortified castle used to stand in front of the manor house. The castle was first mentioned in 15th century. In later 16th century it was converted to a fortification by an Italian builder Giulia Ferrari. It protected Banská Štiavnica against the raids of Turks from the south. Only a ravelin remained of the fortification.
When Andrej Jozef Koháry wanted to rebuild the old manor house, he asked a Viennese architect Johann Entzenhofer to design it. Sloping terrain was extremely risky and building a massive four-wing building required an architecture master. Even today’s statics specialists shake their heads, wondering what obstacles the old foreman bricklayers were able to overcome only by using stone, sand, bricks, wood and lime.

The building involves the elements of calendar symbolism – the manor house had 4 entrances, 12 chimneys, 52 rooms and 365 windows. The interior with original furnishings, paintings and handicraft products is the proof of its owners’ wealth and a good taste. Unique furniture items of the manor house include Zlatý salón (Gold saloon) – the wedding gift that Maria Theresa gave her daughter Marie Antoinette, the queen of France. The room was plated with 24 carat gold. In addition, rich collections of the hunting museum testify about owners’ relationship to forest and hunting.