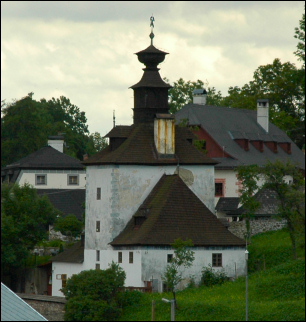 The Knocking tower was used by miners as their alarm-clock, prison and insurance office. Today, you will find an amazing teahouse in this building.

The two-storey tower-like Renaissance-Baroque building (1681) has a shingled roof pointed to a tiny tower with acoustic openings. From this tower, miners were summoned to their morning shift at half past two by knocking on a wooden board. This is why the lyrics of a folk song say “Wake up, Hanzo, they are knocking to go mining, if you are late, you will not be allowed…” The knocking was also used for special occasions, mining councils, funerals and fires. It could long have been replaced by bells, but the miners did not want to give up on the knocker.

The ground floor of the building was used as prison for miners convicted by mining court in the 18th century. The Knocker also served as the seat of the Brotherhood treasury, a mining insurance office, where miners placed a part of their earnings to support the ill, widows and orphans.