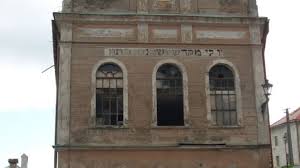 Štiavnica’s synagogue is situated in the town centre, south of Townhall Square (Radničné námestie), on a triangular plot wedged between Strieborná and Novozámocká streets.

The synagogue was built in 1983 on the grounds of two townhouses, bought by the Jewish community from a financial offering taken in 1890. Above the original ground plan, they built a double-floor construction with a barrel vault, along with a rectangular annexe where a Torah ark was placed. In 1941, there was a ban to hold services in the synagogue. In 1950s, a tinsmith workshop on the ground floor was built, and, driving courses were held on the first floor. The building is now renovated and holds a brewery. A plaque has been placed upon the building.