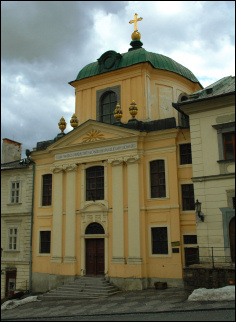 The protestant church is an important architectural monument from the time of the origins of religious liberty. Its construction took place thanks to the Toleration Patent of Joseph II from 1781. The visitors may delight in its interesting interior with its elliptical nave.

Štiavnica was, for almost two centuries, a town with the majority protestant population. In a predominantly Catholic country, however, the Protestants could only build their own church in the late 18th century. The construction was commenced by F. Sivák, a local builder, in 1794 according to the project of J. Thaller, a Viennese architect. In keeping with the Toleration patent, the church does not have a tower and does not stand out of the street buildings. Nonetheless, it is one of the most beautiful buildings of the city.

Its exterior design was architecturally adapted to the surrounding houses. Only its facade and copula bear witness to the fact that this is a religious building. The church interior has an interesting design with an elliptical ground plan, which extends to the sides by three floors of galleries, reminiscent of a theatre. In the church, there is also a valuable baroque organ made by a master from Bratislava.