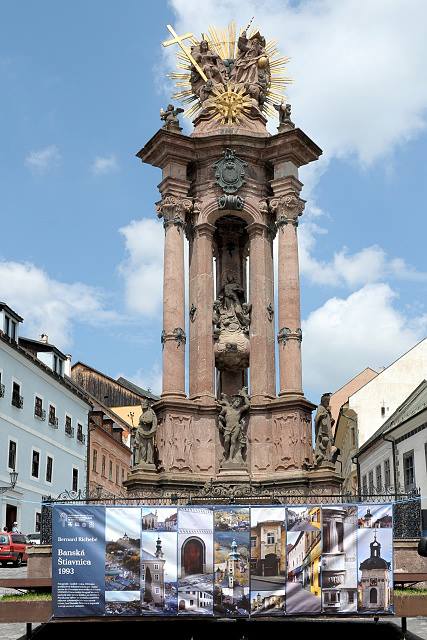 Banská Štiavnica is a town full of beauties and interesting features. As in every town, you can find here various TOPs, exceptionalities and curiosities.

The Stratovolcano of Štiavnica

The town of Banská Štiavnica lies in the centre of Central Europe’s largest volcano, the Štiavnica Stratovolcano. Millions of years ago, it occupied the area of 2000 km2 and was 4 km high. In the course of time and due to atmospheric conditions, it caved in and left a caldera behind – a cauldron of approximately 24 km in width with hills around 1000 m a. s. l. The volcano threw precious metals and minerals out of the middle of the earth and thus forged the destiny of this region for decades to come.

The first use of gunpowder for peaceful purposes

The first documented underground breaking of rock with gunpowder took place in Bieber mining tunnel in Vindšachta (now Štiavnické Bane), a small mining village, on 8 February 1627. The Bieber tunnel was also called “the mother of all mines”, as it was the richest mine in Europe at that time.

In the 18th century, when neither human nor horse power was enough to drain the deeper and deeper mines, the Court of Vienna decided to close them. Ten thousand people would lose their daily bread. Matej Kornel Hell (1651-1743), a mining machine minder and constructor, stood strongly against it. He drew up a detailed plan of creating a hydropower system connecting 60 water reservoirs that enabled the transfer of water from the reservoirs to a place where it was driving water pumps, stamp mills, forges and even mills. As there were no sufficient water streams, rain water from the reservoirs’ surroundings was being collected into ditches. This gigantic water installation in ponds managed to collect 7 million m3 of water.

The technical solution and bevel of the dam at one of the largest water reservoirs were considered the most daring of all water reservoirs in the world for a century. The reservoir was projected by Samuel Mikovíni.

The first mining school in Hungary became the centre of education of all mining professionals in the monarchy since 1762 and was the world’s first academy with a technical focus. A diploma from this Academy was the key to all doors in Europe.

The Meridian of Štiavnica

The Štiavnica “zero” meridian was measured by Samuel Mikovíni after Charles IV, the King of Hungary, commissioned him to draw maps of all Hungary’s municipalities. Mikovíni used the knowledge from his studies of geodesy and land surveying in Jena and based his work on astronomic, geometric, hydrographic and magnetic calculations. The Zero Meridian was crossing the northern tower of Bratislava Castle, Banská Bystrica, Štiavnica and the village of Vojnice. The Štiavnica Meridian is now crossing the upper courtyard of Kammerhof and is marked with a stone under a Renaissance loggia.

The first machine manufacture of steel braided pulling ropes in the world was constructed and launched in the village of Štiavnické Bane as early as 1837.

The accumulator was built by professors from Mining Academy, who won the international competition announced for a solution of supply of accumulators for the Vienna Opera.

Based on the initiative of Ignaz von Born, a well-known European scientist and the member of Štiavnica’s Masonic lodge, the first meeting of European mining and metallurgy professionals took place in the village of Sklené Teplice in 1786. Ignaz von Born introduced his until-then-secret method of extracting metals by amalgamation here. The first International Scientific Society, which was issuing the first scientific magazine, was founded here too. James Watt, the inventor of steam engine, and Wolfgang Goethe, the polyglot, were among the members of the Society.

The first description of a new mineral species – Hodrusite – originated in Banská Štiavnica-Hodruša region. The permanent exhibition of the geology section in the Slovak Mining Museum in the building of Berggericht offers its visitors a representative specimen of this mineral.

THE WONDERS OF ŠTIAVNICA

Snow falls on Sts. Peter and Paul’s in Banská Štiavnica every year

This sentence can make you wonder about the weather anomalies in Štiavnica, as Sts. Peter and Paul’s Day indicates the beginning of summer. However, who would bet on it not being true, would lose. In this case, it is not about the Feast, but about the statues of these saints placed on the face of the parish Church of Virgin Mary Ascension (or the “German church” for the locals). Whenever snow falls, it covers them with appealing coats.

If you want to find out what time it is according to Štiavnica’s Town Hall clock, get ready for a surprise. Its hands are installed in the opposite way as is usual – the long hand indicates hours and the short one minutes. One of Štiavnica’s wonders came to existence when the town hall was renovated in the 18th century and there are several explanations for it. One says the hands were installed by a master’s apprentice, who simply misplaced them. The mistake was discovered only after the clockmakers left the town. Another version: The town council came to a conclusion that an hour lasts longer than a minute and should therefore be represented by a longer hand. The third story says that a little too much drinking was done at the final inspection of the clock and the mistake was left unnoticed.

Goat fastened to a chimney

The inhabitants of little mining houses on the hillsides surrounding Banská Štiavnica used to keep a lot of goat. A goat is a useful animal; ideal for homestead of a poor miner. It is easy to feed – just fasten it somewhere in the garden and it will survive even on the smallest plants. However, gardens in Štiavnica are very steep, sometimes almost on the same level with the roof of the house. Owners of such buildings could easily tie their goat to their chimney – they spared a peg and had no reason to be worried that it would feed down their neighbour’s grass.

Houses in Banská Štiavnica are spread over steep and complex terrain. Thus it might happen that we enter the first floor of the house from the street and only then can we reach the ground floor by taking the stairs. If you do not believe it, you can see this wonder for yourself directly in the centre of the town. The ground floor of Oberaigner’s house on Holy Trinity Square is accessible via the entrance from the square or through the first floor via entrance from Starozámocká Street with a beautiful portal decorated with motifs of wine leaves and grapes.

Bridges were built everywhere across the world in order for people to be able to walk across rivers or streams. The opposite was true in Štiavnica – water was flowing on the bridge and people and carriages used to walk under it. An aqueduct was built in Kysihýbeľ Arboretum above the road to the village of Banský Studenec (Kolpachy) carrying water from the village to Štiavnica. Another wonder of Štiavnica thus came to existence. Nowadays, the cycling route “Štiavnická Anča” leads under the aqueduct without water.

Bull in a chimney

Is there a chimney into which a whole bull can be fit? There is one in Štiavnica. However, it is not a chimney on a roof of a house. Ventilation openings in mines were also called chimneys. Once a bull grazing on grass field fell into such an opening and had to spend a night six metres underground. It had to be pulled out by mining rescuers. Everyone was surprised that the animal suffered no injuries and was not even in shock. The minute the bull stood on his feet again, it started eating the juicy grass heartily.

One more wonder with a clock

Nový zámok (New Castle) served as an observation tower from which the guards were constantly watching the surroundings and looking for any movements and smoke or fire signals from other towers. Every quarter of an hour, the guard sounded a trumpet to indicate that he is awake and the town is safe. Thus Štiavnica’s living clock came into being. This tradition has been renewed in our times and not so long ago, the sound of a trumpet could be heard from New Castle every fifteen minutes. It was an interesting attraction for tourists and a reminder of how fast time flies for Štiavnica’s inhabitants… Today, we listen to the melody of a carillon instead of a trumpet at the striking of every full hour.