Región Banská Štiavnica > What to see > Places and monuments > Calvary 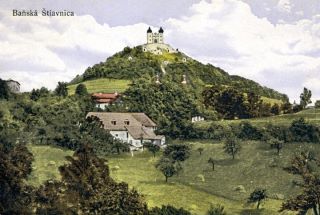 Štiavnica’s Calvary is one of the most beautiful baroque Calvaries in Europe. It is located on Scharfenberg (Sharp mount) hill, thus being visible from all sides and providing a complete view of Štiavnica’s caldera (a large crater which came about by collapsing of the walls of a volacnic crater). The Calvary is remarkable due to its number of stations and the story it tells. After the renovation, it became one of the most frequently visited sites in the region.

The person to initiate its construction was pater František Perger (1700 – 1771) from the local Jesuit community. He built it by virtue of gifts of wealthy miners, officers, but also humble families of miners. The donors are commemorated by coats of arms placed on the frontage of each station.

The construction began in 1745, and it was finished in 1751. Most Calvaries have fourteen stations: they begin with the condemnation of Christ before Pilate and end with the Holy Sepulchre. The Štiavnica Calvary has seventeen stations, three churches (Lower church (Dolný kostol), Holy stairway (Sväté schody), Upper church (Horný kostol)), the Prison (Ecce homo) station, and Holy Sepulchre – the only building located on the opposite, eastern side of the hill. Wooden reliefs in chapels represent, with their typically baroque theatricality, key moments of Jesus’ life until his torture and resurrection. The uniqueness of the Calvary along with its sensitive setting onto a place with a beautiful view make it one of the most visited attractions. In 2007 it was put on the List of 100 most endangered sites of the world and in 2008 commenced – based on the voluntary initiative – its general reconstruction.

The Calvary is open throughout the year on weekends, while in summer season the churches and chapels are open daily. In Lower church, there is a small exhibition, and a guided tour may be arranged. The most valuable artifacts, sculptures, and paintings are displayed in the exhibition called Calvary in Exile (Kalvária v exile) in Starý zámok Castle (Old Castle).