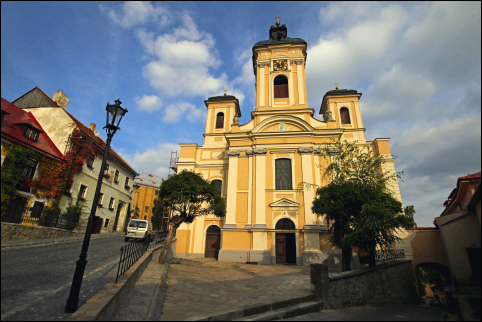 The church of the Assumption of Virgin Mary, also known as “German church” or parish church, is the oldest extant church in the city. It was built in ca. 1222 as a three-nave Romanesque basilica. The building was in possession of several owners and thus undergone various construction modifications.

Already in the early medieval period, Banská Štiavnica was turning into a big, lively town with a high concentration of beggars and outcasts. For that reason, Dominicans decided to aid the city. Already in the beginning of the 13th century, they built a beautiful Romanesque church of St. Nicolas (presently the parish church of the Assumption of Virgin Mary), as well as a monastery.

The Parish church, then church of St. Nicolas, was a Romanesque three-nave basilica with a transept. Its basic extent has been preserved to this day, testifying that it was one of the largest contemporary church buildings in Slovakia.

Dominicans managed the church until 1536; in 1575–1669, it was used by Protestants, from whom it was taken over by Jesuits. Those managed the church until 1773 when the Jesuit order was abolished. In 1776, the church was entrusted to the secular clergy and it became the main parish church.
The church got its classicist look, as well as its new interior, after the fire in 1806 and several renovations. Behind what is now the sanctuary, specifically in the eastern part of the exterior, there are still remains of the shell of the original sanctuary. The locals call the church “German”, as the wealthy townsmen were preached to in German here.

Next to the church building, there was a monastery until the early 20th century. It is noteworthy that, at the time when the monastery was being built, St. Dominic may still have been alive. In the monastery, there was also a school, which kept on going in various forms for almost 700 years. The monastery ceased to exist long time ago. It is now in ruins and a large mining school, built in the monastery garden, sits empty.

Little is known about the old monastery, although there is evidence that there was a famous scriptorium, as well as a library. According to the research, the author of the Kreminca codex, i.e. an old book with religious texts from the 15th century, was a scribe from the Štiavnica monastery. Texts in the books were supplied with colour pictures – illuminations – whose quality often surpassed other types of contemporary visual art. Perhaps it is in the ruins of the monastery where the roots of the deep tradition of the locals’ love for books, book culture, and education can be found.