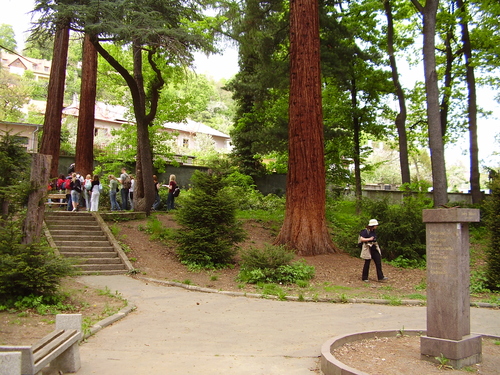 In Štiavnica, everything is up or down hill. It will be worthwhile to renew your energy in the botanical garden, where you’ll find sequoias and a Japanese cedar. The fame of Štiavnica did not lie solely in its subterranean riches, but also in Mining Academy. It was founded in 1762 by by the empress Maria Theresa as a first university institute of its kind in the world; there she brought together the best of contemporary science and technology. The botanical garden surrounds the buildings of Academy.

In the 18th century, mining began to cease gradually, but Academy, the first institute of technology in the world, brought Štiavnica back among important places on the map of Europe. Scholars trained the technical officers for other mining cities as well. Already in 1735, the king appointed Samuel Mikovíni as a professor of the first mining school in Hungary and, thanks to him, the school reached the top level within Europe. When in the late 18th century the imperial court was going through a decision as to where the mining education should take place, the view that prevailed was allegedly that of young Leopold, who had once paid an imperial visit to Štiavnica.

In 1762, the world’s first technologically geared higher education institution was founded in Banská Štiavnica. Later on, it was fused with the hitherto independent Institute of forestry and it became Mining Academy and the Academy of forestry. Founding of the academy meant something of a revolution in the history of the town. The presence of students from all over Europe rejuvenated the town, thus attracting innovative technicians and scientists. The academy at first utilized a few older townhouses in the town centre. At the dawn of the 20th century, three monumental Neo-Renaissance premises were built and equipped with modern laboratories. Buildings exhibit strictly symmetric architectural composition with elaborate stucco decoration of facades as well as interiors. Their palace-like generosity, airiness, flare and tasteful decoration harmonically combine expediency with architectural ethos of the day. Nowadays, the premises are used by local high schools.

It may sound incredible, but even the “stužková” (lit. “ribbon party”; i.e. a high school graduation party where each student is given a ribbon) tradition as a celebration of youthfulness traces its roots back to Banská Štiavnica. At Mining Academy a new culture was formed based on various influences and traditions brought by professors from all over Europe. The traditions of matriculation and giving ribbons to graduates originated right here.

On site of the Academy of mining and forestry, there is also a Botanical garden. It was created after the study of forestry had been commenced, the main task of which was to teach the students how to take care of forests in a professional manner. To meet the needs of the forestry instruction, domestic as well as foreign trees were planted ever since the first half of the 19th century; some of the most interesting of these are giant sequoias and a cedar. A tour of the botanic garden takes about 20–40 minutes.