Región Banská Štiavnica > What to see > Places and monuments 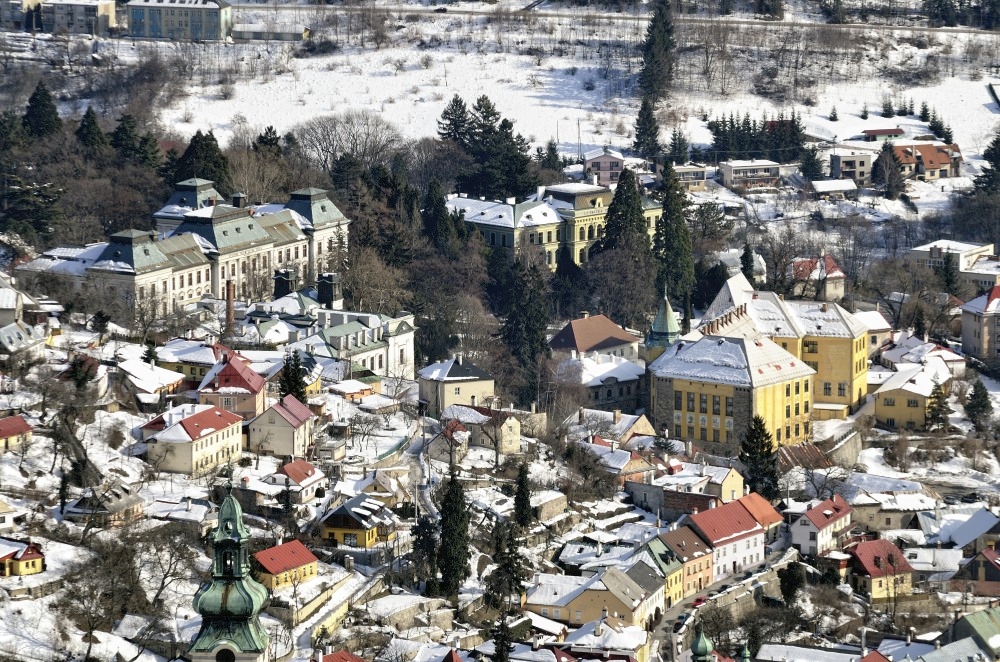 Štiavnica, once called “Silver town”, is like a textbook of history, architecture and landscaping. Metal mining was practiced here already by Celts and Slavs. In the 12th century, Hungarian king Gejza II called German miners here. The town privileges were bestowed on Štiavnica by king Belo IV – likely at the same time as he did in Stoličný Belehrad and Trnava, in 1244 at the latest.

Štiavnica was an “Eldorado”, where gold was sought after by adventurers from Europe and Turkey, as well as by robber barons. For several centuries, the city was a treasury of Austro-Hungarian Empire. Rich miners built palaces here; it hosted the “ministry of mining” of central Hungary. Several architects and artists of European renown worked here. It was the third largest city of Hungarian Empire and a place of origin of the first university institute of technology in Europe. It was a proud city, known throughout the Old Continent.

Štiavnica was giving, so long as it had something to give – only to become poor itself. Once the natural resources ran out, Štiavnica kept going for a while because of its renowned Academy. When the Academy moved away – upon formation of Czechoslovakia – Štiavnica became subject to gradual decline. Its fall was as deep as its rise was glorious. In 1970s, the city centre was in ruins – it was a ghost town. Like several times before, Štiavnica survived, as it were, by a miracle. Today, everything is different. The city centre was, under the supervision of conservationists, restored to its original state. The local artificial water reservoirs (called “Tajchs”) and the remains of mining activity became part of the land, which in turn contributed to its unique character. As time went by, tourists started to come, and the glorious history begins to shine through again.

An important milestone was the year 1993, when the historic city centre was, along with the technological monuments of the region, enlisted in the UNESCO’s World Heritage list.

In Štiavnica, everything is up or down hill. It will be worthwhile to renew your energy in the botanical garden, where you’ll find sequoias and a J...

Štiavnica’s Calvary is one of the most beautiful baroque Calvaries in Europe. It is located on Scharfenberg (Sharp mount) hill, thus being visible ...

The first of Štiavnica’s cemeteries was near a church in what is now Starý zámok castle (Old Castle) area. When its capacity was ceasing to be su...

Banská Štiavnica is a town full of beauties and interesting features. As in every town, you can find here various TOPs, exceptionalities and curiosi...

Holy Trinity Square used to be the centre of the town. The palaces of the richest miners as well as the Church of St. Catherine were located here. The...

Štiavnica’s synagogue is situated in the town centre, south of Townhall Square (Radničné námestie), on a triangular plot wedged between Striebor...

Kammerhof, meaning Court of Exchequer Chamber is the biggest building complex in the historic town. It is a place of exhibit depicting the history of ...

The Knocking tower was used by miners as their alarm-clock, prison and insurance office. Today, you will find an amazing teahouse in this building. T...

New Castle - fighting against the Turks

The building of the Nový zámok Castle (New Castle) is one of the architectural icons of the town. Its silhouette is unique in Europe; it reminds a r...

Starý zámok castle (Old Castle) is considered a “stone chronicle of the town“. Its walls are the gate to the oldest secrets of Štiavnica. Long ...

The Piarg Gate is the only to these days preserved gate from an original town fortification, which was designed by an Italian engineer Ferrabosco. Bui...

The protestant church is an important architectural monument from the time of the origins of religious liberty. Its construction took place thanks to ...

The late Gothic St. Catherine's Church is one of the most beautiful churches in Banská Štiavnica. It is also called "Slovak", because the sermons he...

The church of the Assumption of Virgin Mary, also known as “German church” or parish church, is the oldest extant church in the city. It was built...

You can find out more information about the town from certified guides, who tell visitors stories about its rich history and they guide tourists to th...

Town Hall and the statue of the Virgin Mary

The Town Hall is located in the town centre; its high tower is visible from a long distance. Town council has been working in there for more than 600 ...

Walk through the city

We would like to invite you for a two-hour walk, during which you can see almost everything, what the town centre offers. To those, who love sights, w...