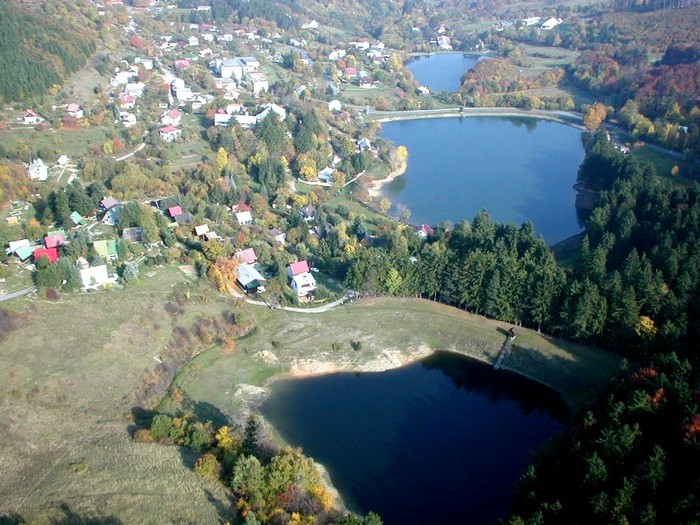 Though it doesn’t look so today, in the 18th century Štiavnické Bane used to be the centre of mining in Europe and of progressive mining technology. In the middle of a large mining complex similar to a huge stone pit, there was just a church, monastery and mining buildings.

Štiavnické Bane, always called Piarg, is an old mining settlement. Root of the name comes from the word Berg, i.e. a hill in German. Piarg had been overshadowed by Štiavnica for many years. However, the history of the municipality is marvellous. Piarg had been the leading ore processor since the 15th century and it used to be one of the most important mining centres in the Austro-Hungarian monarchy. It was also the centre of science, technology, education and healthcare, as well as mining administration. Many inventors were active here—including Matej Kornel Hell and sons, Samuel Mikovíny, Juraj Palkovič and others. Mining reached its peak in 1740.Six hundred kilograms of gold and twenty-three tons of silver were extracted here. It was the world record. This would be worth millions of euro now; however, they were even more precious at that time.

The municipality with 6-12,000 inhabitants, located in the middle of hills, included dozens of mine shafts and tunnels. Small mining houses surrounded by orchards still stand on the steep hills. Small crosses and chapels are scattered throughout the land area, signalising the presence of a long-forgotten mine.
There used to be a building for land surveying here, constructed without a single nail, not to disturb magnetic devices. It was the seat of the Centre of Cartography, where not only regional maps, but also the maps of remote places in Europe used to be drawn. It was here that gun powder was used for the first time in 1629 to blow rocks and the first mining hospital in the Kingdom of Hungary was established, as well as the first school for mining experts. It was here where the Hells family produced many technological inventions.

However, Štiavnické Bane wasn’t as lucky as neighbouring Banská Štiavnica, which arose from the ruins in 1970’s. Even though Štiavnické Bane is the part of UNESCO’s World Heritage, many traces of its glorious past were burnt to ashes or they were devastated. Educational trails will guide you through these traces, in the footsteps of mining. One of the best trails includes the system of Piarg tajchs (artificial water reservoirs) – the core of the huge water structure.