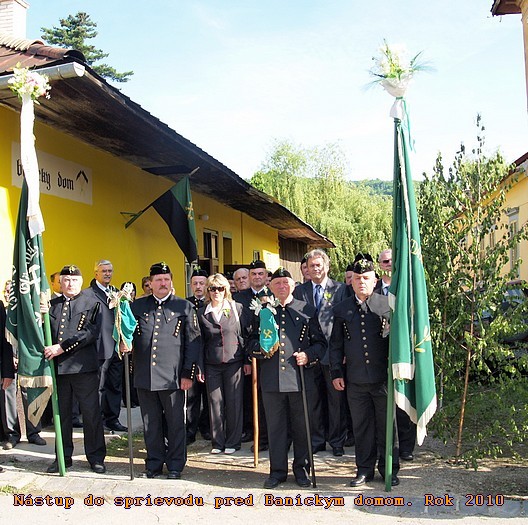 For more than one thousand years without interruption, miners have been entering the depths of the earth in the ore deposits of Štiavnica and Hodruša to excavate precious and ferrous metals from the bowels of the earth. Not only did they have to face extremely hard work underground, but also had to put up with various snares, floods of water, leakage of gasses, collapses and fires.

Moreover, the endless mining tunnels and shafts are dark, so the miners have always been forced to use mining lamps. They used to work 12-16 hours a day, from Saturday to Sunday. They used to be convened by a Knocking tower. Not only men did work, but also women and boys, who had to take the excavated material out. Miners believed in supernatural creatures and the last thing they wanted was to make them angry. So, they were careful not to do certain things. They were not allowed to kill anything living, shout or whistle in a mine. Their belief was their shield against fear. No one would have gone down the shaft without a prayer.

Each mine had its own patron worshipped by the miners working there. Together they prayed to him for “mining blessing” and protection against every kind of disaster. A little chapel or a church used to be built near the shafts. The chapel with the sculpture of St. Michael fighting the dragon that used to stand at the mouth of the mining tunnel Michal, was removed in the late 20th century as many others. Nowadays a fragment of the sculpture can be found in Jozef Kollár Gallery. Every year, during the feast day of a mine’s patron, a mining offertory took place. Miners were engaged in the celebratory mass together and in the end they made offertory – donated money for church purposes. Entertainment and refreshment followed afterwards, with dancing and music played by mining band. The last traditional offertory took place in 1953, near the Mária shaft. Miners keep greeting themselves by saying “Zdar Boh!” (meaning something like “May God give you success!”)

There are also unique academic traditions formed in Mining Academy. The Academy was established by the Empress Maria Theresa in 1762. Salamander Parades are among the best-known. Originally they used to be organised in case of death of a professor or student of Mining Academy. Students in a parade were engaged in the last farewell to the deceased, making the movement of a lizard – the symbol of Banská Štiavnica. Every year Salamander Parade was also accompanied by welcoming students to the first grade. They left Mining Academy, passed the town singing up to the Glanzenberg shaft and there they went down the shaft for the first time. After that the parade continued to the coffeehouse “U kahanca” in Holy Trinity Square (Námestie sv. Trojice), where they joined “šachtág” [shakhtag], including the admission of first-graders to the social class of miners by “jumping over skin”.

The “Šachtág” tradition of ceremonial meetings of miners was restored in 1992 outside academic circles by The Mining Association of Banská Štiavnica and Hodruša. Following their activities, a special regulation – a law was adopted: Act no. 1/2001 Col. On keeping order and high spirits during šachtág (so-called “beer law”).

The inhabitants of Štiavnica were mainly Slovaks, Germans, Hungarians, later Jews. The original dialect called “štyavnyčtina” is unique and cute. Common words used daily as well as mining terms were normally formed by distortion of the original German term; though some terms are specifically Slovak. Up to the present day, the local people have been using the name “Piarg” (Berg, hill) for Štiavnické Bane and “Kolpachy” (Kaltbach, a cold stream) for Banský Studenec. The portal of a mine was called “muntloch” (Mundloch, oral vestibule), a lifter – “hopcuk”, raw ore – “fôrod” and handbag – “ridiklík” (???). Dictionary of Štiavnica is here.

“Štyavnický Náco” is a folk culture figure – a simple good-hearted and joyful miner. Nácko is a symbol of a simple good-hearted and joyful miner representing serious but also joyful aspects of generations. This figure became a subject of an independent field of study named “Náckology”. The results of researches have been yearly presented during the event “Nácko’s Štiavnica”. The claims that Nácko was not a real figure are not based on truth. This can be proved by a memorial tablet on his birth house in Dolná Cinglajtňa in Banská Hodruša, as well as the memorial tablet on the house in Horná Resla in Banská Štiavnica where he used to live. The person who officially played this character for the first time was a secondary school teacher Jozef Vášáry (1915-1973). The figure of Náco was represented by him throughout two decades. He was succeeded by a mining technician Jozef Osvald (*1936), who has also collected a great number of Nácko’s jokes and pranks published in numerous publications. Nácko of Štiavnica used to live and keeps on living with us to hold a mirror up to our attitudes, which have not been always right. He would always do this in his humorous way. A saying states: “Nácko muoj, už sa len nekrenkuj, Náco bude žit, kým Štyavnica Štyavnicou bude!“ meaning “My Nácko, don’t worry anymore, Náco will live until Štiavnica will remain Štiavnica!” “. In order not to forget Nácko, his statue has been standing in Horný trotuár street in Štiavnica since 2013.