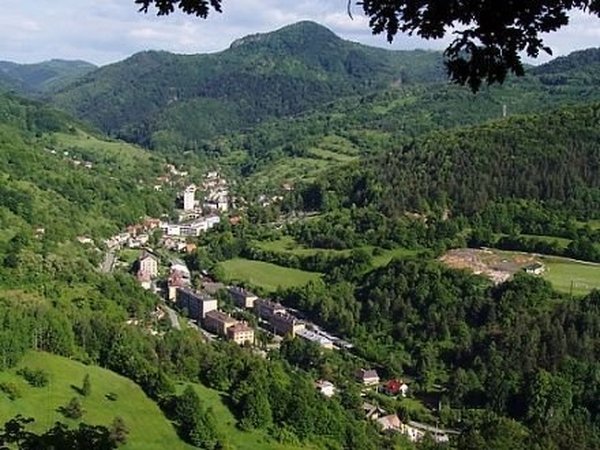 Those who love nature may enjoy hot thermal springs in Vyhne, allowing year-round bathing. The unique nature reserve of blockfield Kamenné more (Stone Sea), formed by huge rhyolite boulders, is also worth visiting. The blockfield is situated near the municipality of Vyhne. The village is also known for its Kachelman machine production and the brewery of Vyhne, which is said to be the oldest in Slovakia. Besides, there is a unique chapel of a world famous architect Ladislav Hudec – his only structure built outside Asia.

Vyhnianska dolina (valley) is among the most beautiful in the Štiavnické vrchy hills. The first written document of an originally German settlement Isenpach (later Eisenbach – Iron Stream, Wihine in Slavic) comes from the 13th century. For mining, processing of iron ore and smitheries, forests rich in wood and the convenient location of the village, Banská Štiavnica got Vyhne under its administration in the 16th century.
The municipality of Vyhne used to be the place of mining; the most important mining tunnels in the area include 12-km-long Mining tunnel of Anton Paduánsky. Reconstructed entrances to the mining tunnels can be found at the mining pathway in front of the way to Vyhne and Banská Štiavnica. People in this steep land area used to earn their living by carting, charcoal burning and milling.
However, Vyhne had been also famous for its spas, which were among the most popular in the Kingdom of Hungary. They were mentioned as early as the 13th century. Their beneficial effects were used by rich main miners as well as ordinary people. Even though they had been visited by many influential guests from entire Central Europe since the 16th century, their boom didn’t come until 1870’s.
The complex functioned as a concentration camp for Jews during World War II and when military was passing the place in April 1945, spa burned to the ground. Their centuries-long glory snuffed out. Only few private villas remained from the times of spas, Szokácsova villa near Vodný raj (Water Paradise) resort is among the most beautiful.

We can mention the Church of St. Michael the Archangel (Kostol sv. Michala Archanjela), which has been standing on the hill for more than 230 years. Construction of the Church and a clergy house was subsidised by the extracted gold and silver. The elegant church hides late-Baroque altars with valuable paintings.

Exceptional features include the blockfield Kamenné more, which is the result of the Štiavnica volcano activity. The nature reserve is composed of big rhyolite boulders. The blockfield is situated near the municipality of Vyhne.