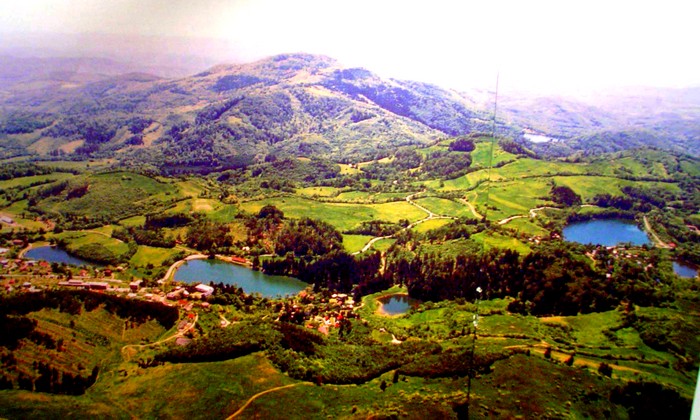 Though it doesn’t look so today, in the 18th century Štiavnické Bane used to be the place of European mining and progressive mining technology centre. Only a church, monastery and mining buildings used to stand in the centre of a huge mining area resembling a big stone quarry. Today’s municipality is decorated by tajchs, serving mainly as recreation areas. Hiking in lovely-shaped hills over the village brings unparalleled views of the Štiavnica region.

Piarg, as Štiavnické Bane used to be called since time out of mind, is an old mining settlement. Even though the village used to be overshadowed by Banská Štiavnica for many years, its history is incredible. Piarg had been the leading ore processor since the 15th century and it used to be one of the most important mining centres in the Austro-Hungarian monarchy. It was also the centre of science, technology, education and healthcare and mining administration. Many inventors were active here—including Matej Kornel Hell and sons, Samuel Mikovíny, Juraj Palkovič and others.

Mining reached its peak in 1740. Six hundred kilograms of gold and twenty-three tons of silver were extracted here. It was the world record. The municipality with 6-12,000 inhabitants, located amid hills, included dozens of mine shafts and tunnels. Small mining houses surrounded by orchards still stand on the steep hills. Small crosses and chapels are scattered throughout all the land area. They signalise the presence of a long-forgotten mine.

However, Štiavnické Bane wasn’t as lucky as neighbouring Banská Štiavnica, which arose from the ruins in 1970’s. Many traces of its glorious past – buildings in which the history of technology and social movement was being written – were burnt to ashes or they were devastated.

Besides, this humble municipality prides itself on several world and Europe firsts. The most significant was the first use of gun powder for blasting rocks, application of pumping machines from the workshop of the Hells family – thus saving the mines flooded by water and restoration of mining, the first mining hospital in The Kingdom of Hungary and the first school for mining specialists in Central Europe.