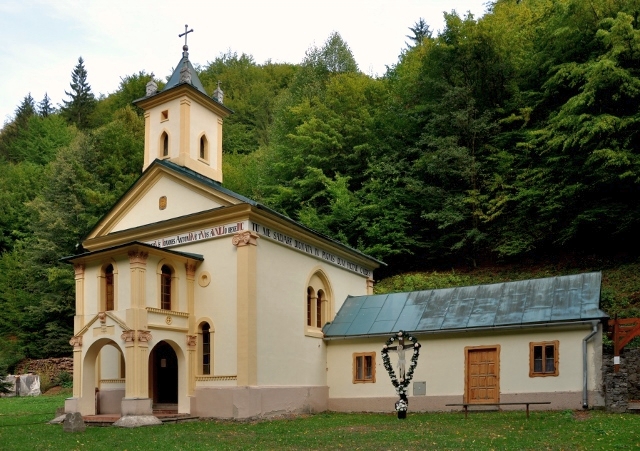 When the ancient mining village Hodruša arose on the steep western hillside of the Štiavnica Mountains will probably remain a mystery forever. However, gold and silver had been mined here since time out of mind.

More than 47 tons of gold and 2.5 tons of silver were extracted in the mines of Hodruša. Still, instead of luxurious houses and great squares only mining shacks scattered on the steep slopes can be found here. Inhabitants of Hodruša paid more attention to mining and technological landmarks and sights. That is why this municipality owns more mining technical monuments than Štiavnica.

Legends being a part of oral tradition say the village was formed after the old mining settlement of Kerlig/Karlík on the top of the Mountain was abandoned. However, historical facts say the villages Kerling and Hodruša coexisted side by side up to the 17th century. Archaeological finds including bronze axes prove that the western part of Hodruša has been settled at latest since 7th–4th centuries BC, though the first time inhabitants of Hodruša were mentioned in the tax register of Banská Štiavnica was in 1364. The municipality Hodruša-Hámre itself was established as late as in 1973 by joining three villages – Banská Hodruša, Hámre and Kopanice – and their separation from Banská Štiavnica.

One of the greatest attractions of the municipality is walking underground, in the mine of Starovšechsvätí in Hodruša. It is a combination of an adventure and a journey to the famous mining past. The mine is more than 700 years old and it is preserved in the way it was then. The professors of Mining Academy of that time spoke highly about its unique interior, calling it a textbook of mining. It is possible to visit the mine only in groups and it has to be agreed in advance. But it is worth it. In the dusk of long mining tunnels, visitors can experience on their own the atmosphere in which miners used to work for centuries; they can also learn about the development of workings excavation, mining or reinforcing the tunnels.

The exhibitions in two reconstructed original buildings make the picture of mining in Hodruša complete. In addition to typical historical tools or instruments, visitors can find here other interesting things closely related to mining, as well.

Moreover, the legendary prankster and joker Nácko has his own little room here.

The mineralogical exhibition called Kvety baní (The Flowers of Mines) is also very attractive, offering exhibits from the region, as well as from other corners of the world, and trophies of the local gold-mining club.

Hodruša-Hámre offers historical mining monuments, as well. Internet educational pathway called Time travelling (Cestujeme v čase), starting and ending opposite the mining tunnel of Starovšechsvätí with 16 stops, will guide visitors through the most interesting monuments in Banská Hodruša. One of them is Mining Knocking Tower “Klopačka” from
the early 16th century.

Local historical dominant features include also Golgotha (Golgota) sculpture from the
early 19th century. Admirers of religious architecture can enjoy the place – there are seven churches, including little mining church in Jalšová municipality with interesting church door handles looking like fish and the oldest Church of st. Nicolas (Kostol sv. Mikuláša) of the 14th century.

The mining municipality, included into the UNESCO’s World Heritage List as a part of the
surroundings of Banská Štiavnica, also offers several pleasant ways to relax near water areas in summer. You can refresh yourself in Hornohodrušský tajch near Salamandra Resort centre. Dolnohodrušský tajch is currently being reconstructed.

Near Upper Hodruša tajch, the Salamandra Hotel **** and the Salamandra Resort ski centre were built. A four-seat chair lift, ski rental, ski school and associated services, as well as free-of-charge parking lots are at the visitors’ disposal. Artificial snow can be manufactured as necessary in winter. In summer months, the Resort provides excellent conditions for hiking, mountain biking, swimming and boating in the water reservoirs – tajchs. In addition, there is a playground and workshops for children here.

This place doesn’t forget about regional traditions and customs, including bobbin lace of Hodruša. Its uniqueness has been highlighted by the fact, that in 1940’s the famous lace school in Hodruša was asked to produce the lace for the wedding dress of Elizabeth II, Queen of England.