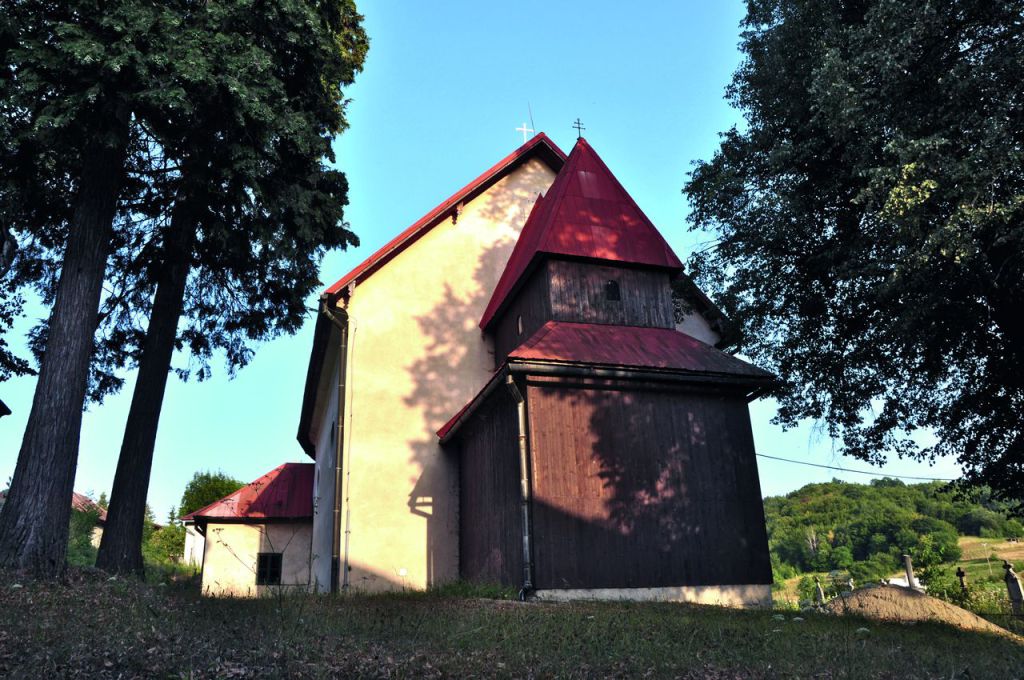 Banský Studenec, a village at the end of the world, is attractive for all admirers of recreational cycling thanks to beautiful surrounding countryside. In the municipality, there is also a tajch (artificial water reservoir) suitable for family bathing.

It is believed that the first settlers settled here to pan for gold in the stream flowing to Svätý Anton. It is as well indicated by its original name – Kolpachy (coming probably from a German word Goldbach, i.e. Golden stream) – still used by the local people. It was mentioned as Villa Kulpach as early as 1266 in a Latin document. The land was crossed by an important mail route Magna Via, connecting Banská Štiavnica and Europe.

Inhabitants earned their living by mining, metallurgy, producing timber to be used in mining and coal burning. The population of the village was around 1,200 in those days. Mining experts doubt the truthfulness of the legend about gold panning in Studenec. They say, the stream had nowhere to bring the gold from, as there weren’t any surface ores near the village. Therefore, the name Kulpach might not have been derived from a word Gold, but from an adjective kalt, meaning cold, resulting in the name Banský Studenec (i.e. Banský Cold [Stream]).

More significant development occurred during Socialism when a road and The House of Culture was built and electricity, water and telephone line was led here.
Local people used to work in factories in Banská Štiavnica. In late 1970 tourism near Kolpachy tajchs was heavily restored; 130 cottages, many of them quite large and owned by enterprises, were built.

The Jesuits from Banská Štiavnica greatly contributed to building the church and the parish in the village, as well as to founding a lower grammar school in the times of the Empress Maria Theresa. The church dedicated to the Lord’s Transfiguration was built in the Baroque style, according to Martinelli’s designs, in 1745. Later, the local people of Kolpachy built a small wooden bell-tower called pitvorec for the money they made by bell-ringing at funerals and by collecting offerings. Three bells were transferred from the church tower to the wooden one. The two largest bells were requisitioned at the end of World War I; only the small funeral bell cast in 1626 remained. Unfortunately, this was stolen by an unknown offender in the 1970s.

It is said that a Jew bought the painting Visitation of the Blessed Virgin Mary, originally placed in the church, for 10 guilders. He had it renovated for 400 gold ducats in Vienna, and sold it for 2000 gold ducats at an exhibition in Paris. Originally, the painting was one of six constituting the boards of the main wing altar in the St. Catherine’s Church in Banská Štiavnica. The picture was painted by a recognised master M.S. in 1506. It might have been hidden in the church in Banský Studenec to protect it from being stolen by Turks. Currently, it hangs in the Hungarian National Gallery in Budapest.

Alojz Hatala, a priest and national revivalist, lived and worked in the parish in the 19th century. He is buried in one of the priests’ tombs alongside the church.

The Chapel of St. John of Nepomuk

The Chapel located in the upper part of the village was built on the location of an original wooden chapel. This was built by Mária Króner, a childless widow from Kolpachy, in 1882. In her testament, she also dedicated 5 hectares of meadows with the intent to assure the chapel’s maintenance and the continued celebration of masses and worship services. The new brick chapel, including a new altar and the statue of the patron saint of mid-20th century, was financed by the offerings of believers.

Kolpašský tajch is one of the most visited ones in the region. As its sides are not so steep, it is suitable even for families with children. Big (Veľký), Small (Malý) Kolpašský tajch and Rybník used to form one system. Veľký Kolpašský tajch was built in 1730. Rybník tajch was a subsidiary water reservoir of Kolpašské tajchs. It was located near today’s train station and was also used for fish breeding.

Construction and further expansion of mining buildings caused Rybník tajch to disappear. A general renovation of tajchs started in 2007.

The settlement of Kysihýbel is located in the valley of the Jasenica stream, and is part of Banský Studenec village. There are a couple of houses here, a small forestry manor house, and a system of fish ponds, built after World War I.

Local people keep horses, which are often seen grazing around the ponds. Natural landscapes in the surroundings are much-favoured by hikers. A forestry-focused educational trail starts and ends in Kysihýbel. It runs past several naturally and historically

interesting points; for example, the Feistmantel’s garden (originally a botanical garden of a forestry school, today a massive forest), Skália (picturesque andesite rock cliffs) and Kysihýbel Arboretum, which is a research site with a lot of exotic wood species (it is closed to the public).

Worth visiting is the Diery locality (also called), centuries-old underground quarry, included in the UNESCO’s List of Monuments. Reportedly, building stone was extracted here as early as the 14th century. It is advisable to take a flashlight when visiting Diery. A column with the years 1768 and 1783 carved into its surface has been preserved in the rear of the quarry chamber. In Kysihýbel, you can also find an aqueduct, which was constructed around the year 1870, when the narrow-gauge railway from Hronská Breznica to Banská Štiavnica – Anča of Štiavnica – was being built. The water from Kolpašské tajchs ran across the aqueduct to the ore-processing equipment next to the František Shaft in Banská Štiavnica.

Since the water once ran “uphill” here, it is considered to be one of Štiavnica’s wonders.

Thanks to its easy terrain which doesn’t require special training, Banský Studenec is favourite mainly among recreational cyclists.