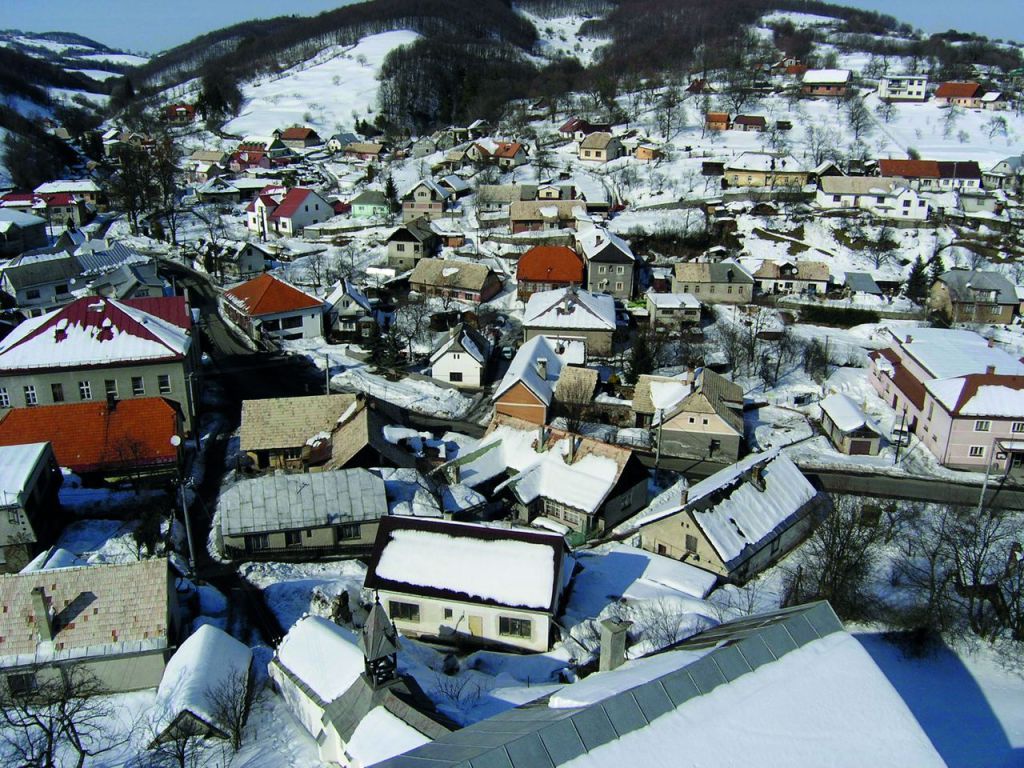 Banská Belá municipality is an old mining municipality, former mining town. The rarest monument is the Parish church of the 13th century. Its size proves that the municipality used to be quite important. DINAS factory designed by a renowned Slovak architect Emil Belluš is interesting.

In the region surrounding the municipality you can bath in tajchs, go fishing and cycling on “Bajkom k tajchom” (Bike to tajchs) trails. Children Farm Gazdáčik and Vila Bela, both suitable for active families with children, belong to the municipality.

A legend says that when Hungarian King Béla IV was fleeing from Tatar soldiers, his horse tripped on something, it had his horseshoe knocked off and the King fell on the ground. As he was trying to stand up, he found a lump of pure gold. When he finally drove the Tatars out of the country, he returned to the place where he had found the gold, he established mines and a settlement Belá there. In fact, the oldest written document mentioning Belá in connection with silver mines, comes from 1228, i.e. before the raid of Tatars. Early mining in the region of Belá is related to surface mining, maybe as early as the period of Celtic settlement. The richest ores of gold and silver were coming to the surface, being approximately 400 metres long and 40 metres wide. It is supposed that underground mining in this area began in the 13th century, when German miners came here.

The young town kept developing promisingly: stamp mills aroused in the valley in direction of Kozelník, as well as ore processing facilities and smelt-houses. The proof that Belá used to be very important, is the fact that it had town privileges granted as early as the 13th century and no later than the 15th century it became a full member of the Unity of seven mining towns, including Kremnica, Banská Štiavnica, Banská Bystrica, Pukanec, Nová Baňa, Ľubietová and Banská Belá.
Its gradual downfall began in the 16th century. There were a couple of reasons: decreasing quality of ores while the cost of extraction was increasing, groundwater in mines occurring in still deeper mines and nearly hundred-year-long Turkish plundering.

The Parish Church of St. John the Evangelist and Apostle

Banská Belá had its own, in those days quite big stone church, as early as mid-13th century. It was build in late-Romanesque style and has been rebuilt several times since then. The tower is original and it is supposed that it was heightened by two-story octagonal extension with a guard room inside. When Turkish raids, uprisings of nobility and religious unrests ended, the mining in those towns was re-established and profitable again. The Emperor Francis Stephen of Lorraine, husband of Maria Theresa, came himself with his escort to support the development of mining. In this occasion a copper Baroque cupola with latern was built on the tower.
Today the shrine is dominated by a neo-Gothic wooden altar bought by Anton Oldinger at Millennium Exhibition in Budapest in 1896.

The Church of Virgin Mary Scapulary

Construction of the chapel by the parish church right above the mining tunnel was ordered sometime in the 15th century by miners who had been buried in the tunnel and saved. It was dedicated to the Virgin Mary Scapulary.

Written documents prove many healings through the intercession of the Virgin Mary, so pilgrimages has been taking place on the occasion of the feast of Virgin Mary Scapulary in Banská Belá since 1713.

Church navy wasn’t added to the chapel until 1708. In those days native Catholics used to argue with German Lutheran (Protestant) immigrants in mining towns. When a local Catholic priest had to hand the church and parsonage over to Lutherans, he decided to convert the chapel into a church. “By the power of snobbish fellowship of Banská Belá (Dilnu), first church was taken from us by Lutherans. However, by diligence and contribution of Catholic patrons, mister Krištof Hertinger and mister Knafel, three walls were rebuilt under the initiative of the priest Juraj Lanzhocký.”

Opening hours for the public: Holy masses: Saturday at 8:30 am

It was built thanks to Andrej Hertinger, then senator and mining master. Pent roof is covered with shingle roofing and there is a little bell tower at the top. The bell was donated by the local parishioner Mária Longauerová in 1939. Original bell was requisitioned until World War I.

Hight hopes were pinned on excavation of Belianska hereditary mining tunnel. It was to drain flooded mines and make access to new anticipated ores on the west. Excavation begain in 1505 and its total length is 8,700 m. Only in years 1608 -1638 the tunnel consumed 91,249 guilders. It was a disappointment when the mining tunnel along Siebenweiber ore vein got to already mined richest parts and the rest wasn’t too profitable. Entrance to the hereditary mining tunnel goes along a blue cycling trail to Kozelník.

Walking around the municipality

Nice walk to Jasenica water reservoir and Halča tajch goes from Dinas factory along the the route of the former narrow gauge railways called “Anča of Štiavnica“.
Along this road you can get to Banská Štiavnica (3 km). When taking the same road but in opposite direction, you can get to the village. The road offering a nice view of the municipality will go past U Gabriely inn up to churches. By church stairs you can continue to the monastery, chapel and former Town Hall. When going from the churches, you can walk above the school area to get under Vraný hill. From this point a nice path leads to the Calvary of Banská Štiavnica (3 km).

Cycling trails in and around Belá

In the Belá biking area “Bajkom k tajchom” (Bike to tajchs) you will find approximately 40 km of well-maintained trails suitable for undemanding bikers, too.

Every second year on Saturday before a pilgrimage, catching and partition of a crocodile takes place at Halčiansky tajch. This tradition is rooted in a story which happened in 1962 when a few buzzed inhabitants of Halša settlement were returning home from a Belá pub. As they were going along Halčiansky tajch, they saw a pine trunk swimming on a surface, confusing it with a crocodile. They hurried to announce it to town government and the town council issued a warrant for the monster’s catching and disposal. This story motivated others to tease inhabitants of Belá and establish a peculiar tradition. Catching and partition of a crocodile has been a comical way to point out the municipality’s maladies and problems for more than 50 years.