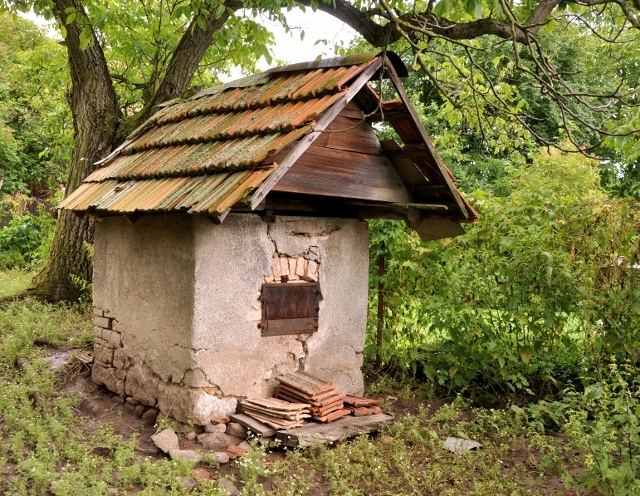 Baďan is a traditional agricultural village built on a sunlit place on the southern slopes of Sitno. The village with a well-preserved mosaic of one-storey houses on both sides of the stream and a church on the hill has only about 200 inhabitants. However, it is rich in culture, traditions, customs and traditional architecture. The municipality is proud of reconstructed Romanesque rotunda – one of the oldest in Slovakia. Beautiful surroundings will invite you to have a walk, pick some forest fruits and renew your energy. The trips to this place become more and more popular.

Baďan first appeared in a written document of 1285 as Villa Bagun. For centuries it used to be the property of Hont landlords of the south, as well as nearby Klastava. The village used to supply mining towns with food and craftsmen’s products. It was ruled by a vogt with members of the local committee called boženíci / prísažní. Inhabitants were divided according to their property – into wealthier peasants, poorer peasants and sub-peasants (podželiari). A smith, maltster, butcher, carpenter, mason and later also a shoemaker had his workshop here. Children were taught by local parish priests in a clergy house. Evangelical church in the municipality served also for the neighbouring villages of Klastava and Počúvadlo. Once an independent village Klastava is now a part of Baďan.

There are elements of original folk architecture preserved in the village. Simple and purposeful folk houses with a large room for keeping animals and storage are marked by Hont tradition. In the centre of the village, there is a park with wooden statues of animals, a sandpit and wooden benches under the trees. Each animal is supplied with a short characterisation. Besides games and relax, it is also good for environmental education of little children.

Late-Renaissance appearance of the Evangelical church is a result of numerous reconstructions. It has some Renaissance, Classicistic and even contemporary features; however, the most valuable part is the Romanesque rotunda. Rotundas were popular in eastern countries – in Byzantine Empire. There are only about 20 of them in Slovakia.
These stone masonry buildings were simple from outside, but their interior was richly decorated by paintings. Reconstruction of the rotunda in Baďan was finished sometime in the late-Gothic period. A rectangular nave was added to the place of shrine. Fortunately, entire stone dome was preserved, as well as the door and slotted rotunda windows. Church interior is dominated by old elements, respectfully supplemented and revived by the new ones. Natural materials and interior colours were chosen to cohere perfectly. The church has been reconstructed completely in recent years.
You can visit the church all year long by prior agreement on tel. number 00421 45/672 66 24, or + 421 918 982 842, or e-mail: [email protected] Guided tour takes about 30 minutes and costs 2 €/person. More information here: http://badan.webnode.sk/o-nas/evanjelicky-kostol/

This little humble room was enough for many memories of great grandparents. The folk room is furnished by old furniture, costumes and clay cooking vessels. Local people will gladly narrate how people used to live here, what they were occupied with, what they used to wear and eat. They will initiate you into the art of weaving looms and spinning on a spinning wheel.
You can visit the folk tradition room all year long by prior agreement on tel. number 00421 45/672 66 24, or + 421 918 982 842, or e-mail: [email protected] Guided tour takes about 30 minutes and costs 1 €/person.

In Háj which is a part of Klastava municipality (over the cemetery; accessible by educational trail), there are four basements carved into tufa rocks. Here local inhabitants used to hide their food during Turkish raids. Several years ago they had been used for the storage of vegetables. Later, however, they were covered in soil of a slipping slope, hid into bushes and became almost invisible. In July 2013 four of them were cleaned and made available for tourists.

The countryside around Baďan is, without exaggeration, fairy. Valleys alternate with hills, forests with meadows and pastures, attracting people to have a walk. If you are lucky, you will be rewarded by mushrooms, wild strawberries, blackberries and medicinal herbs.

Those who love countryside, silence and moving outdoor, can take an easy educational trail. It begins in Ladzany municipality and end under Sitno hill. Nine tourist information panels about the histories of Ladzany and Klastava municipalities, quarry with three kinds of andesite and about the mill in Klastava, reflect the memories of local people. You will also learn about the sufferings of the men who fought during Slovak National Uprising by the mill of Počúvadlo. You will get to know fauna and flora of the region, as well as many interesting geological sites.
11-km-long educational trail can be taken on foot (in approximately 5 hours) or by bike. It starts in Ladzany municipality, goes on along the stream of Klastava and ends by Dobrá voda cottage near Počúvadlianske lake. At the end of the trail you can continue by the red sign leading to the top of legendary Sitno hill. Climb takes about an hour.

The people in the village love their roots. Ancient traditions and the joy of living is kept by Baďančanka folk group, the festival called Podsitnianske dni hojnosti (Days of Abundance in Podsitno) and Drayman race.

Folk festival focused on returning to folk customs and traditions. During festival villagers meet natives and visitors to share their memories and living cultural heritage of ancestors. The spirit of centuries and old crafts come to life, air is filled with the smell of traditional cakes, crackling scones called pagáče, buns of housewives, meal of flour called párance, venison goulash, roasted sausages or homemade bread and poddymníky – pizza of Baďan. It takes place on the second Saturday in July.

The competition of draft horses used for handling wood. The competition has 3 disciplines: drayman slalom, handling wood, force competition in pairs. Highlight of the race is the competition for “The most beautiful couple” decided by voting of the event participants. The event is organized by the municipality of Baďan, together with the family of Jozef Bajnok, on the first Saturday of June.

Fairy stops with passages from famous fairy tales, trampolines, a bouncy castle or yummy cotton candy are prepared for little visitors and their parents on International Children’s Day, as a rule on the last Saturday of May. Snacks are prepared for everybody.