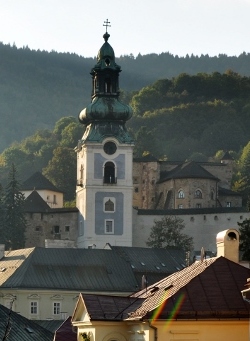 When a volcano erupted about 15 million years ago, it predestined the fate of a man and the nature in the Štiavnica region for a long time to come. The volcano once approximately 4 kilometres high was detrited to today’s 1,000 metres by time and natural forces. Thus arose the caldera of Štiavnica, a kind of a pot with a diameter of about 25 kilometres, one of the biggest in Europe. Thanks to the eruption, precious iron ores found their way to the surface.

The region had been inhabited as early as in prehistoric era – long before legendary Celts, devoted to the secrets of mining and metallurgy. Archaeologists have been revealing the traces of prehistoric areas, cultures and inhabitants not only on legendary hill Sitno, but also in the whole region.

How did the town of Banská Štiavnica arise? Do you know the legend about the shepherd surprised by little lizards carrying gold and silver dust on their backs? This story is said to start the great mining story of the town. The contours of the town’s history are obscure, though scientific researches keep bringing more and more light into the history of the oldest mining town in Slovakia.

We will build a new town!

Surface ore deposits were extracted as early as in the late 12th century. Precious ore veins led down to the depths of the earth, but local settlers weren’t really experienced in underground mining. Thus, Hungarian rulers invited to the region miners and metallurgists from the German regions of Saxony and Tyrol. They were granted a number of motivating privileges, including soil, the right to extract, build a house, or a taproom right. New settlers began to build their new home in the Štiavnica region. They wanted it to resemble the prosperous locations in Western Europe.

The world of Renaissance and Turkish raids

With the mines of Štiavnica going deeper and deeper in the 16th century, the difficulties with groundwater were increasing, too, as the water kept flooding the mines mercilessly. Moreover, when Buda collapsed in 1526, the country had to manage an effective defence against Turkish expansion. For unimaginable 150 years the Turkish thread was a day-to-day reality of the Štiavnica region.

Many main miners left the dangerous area of the town. Those who stayed fortified the town. Turks subdued many municipalities in its surrounding, but they never conquered Banská Štiavnica. However, when the never ending grip of Turks multiplied by the uprisings of nobility and endless conflict between Protestants and Catholics ended, the town was left weary and decimated.

The volcano eruption wasn’t the only important explosion in this territory. Mining tunnels and shafts had been excavated by heavy toil for centuries. Miners used to dig into the ground by hammers and picks – 12 hours a day, 6 days a week. Two of them were able to excavate at most 10 meters of a narrow tunnel – “kresanica” – into hard rock. Hundreds of kilometres of mining tunnels were excavated manually up to 1627, when gun powder appeared. It had been known in ancient China already, but it was used for peaceful uses for the first time in Banská Štiavnica. The town entered the world history by the first documented mining blasting: gunpowder was used in an English mine only 50 years later!

This method accelerated the excavation of mining tunnels and shafts. This speed of mining commanded inventions of new mining equipment and technologies, more efficient pumps, high-level surveying and cartography. Still, the question of propulsion – energy was remaining unresolved. The only known propulsion, besides organic power, was water. However, there weren’t enough watercourses in the Štiavnica hills and the narrow streams weren’t sufficient to drive a stamping mill crushing extracted ore. On the other hand, the water kept flooding the mines underground, which was very risky. Pumping mechanisms were propelled only by organic power – hundreds of people were draining the water, hundreds of horses were spinning the underground pumps. What unimaginable drudgery!

The news of the difficulties with water in the famous Štiavnica mines spread across Europe, attracting the best inventors. However, they weren’t able to find a solution. This serious “energy crisis” reached its peak in the early 18th century when Vienna Court Chamber decided to close the mines.

The power of human reason

Using organic power for driving mechanisms reached its limit. So, only water remained; but where to get it? Main machine-minder Matej Kornel Hell came up with an idea to build artificial reservoirs, which would be filled with rainwater thanks to their ingenious system of ditches collecting the water.

This unexpected solution was considered unreal by the Chamber, but Hell wasn’t discouraged. With his precise calculations and justification, he finally persuaded the emperor Charles IV to make Chamber change his decision. He completed his first tajch – Vindšachta – in 1715, others were soon to follow.

The water soon disappeared from abandoned mines – thanks to this more effective draining. His work was resumed by Hell’s son Karol Jozef and Samuel Mikovíni. Their effort resulted in one of the most perfect hydro-power systems of the world. Tens of kilometres of ditches used to collect water into sixty mutually interconnected tajchs with overall volume of 7 million cubic metres of water.

The power of water was driving pumps pumping thousands of buckets of water a day. It was also driving the machinery processing iron ore and metals, or even mills. The massive water management system in Štiavnica not only saved the local mining, but also its energy base gave rise to mining technology being a model for other mining regions in the world.

Golden Age of the Baroque

Gifted and hardworking inventors Matej Kornel Hell and Samuel Mikovíni triggered the Golden Age of mining in Štiavnica. Prosperous mining business was beneficial to development of all spheres of life. Profits of Štiavnica silver and gold broke the European record and between years 1740-1760 mining exchequer had net income of 42,498,000 guilders. Unimaginable amount of money!

Progress in mining stimulated the development of crafts of cloth makers, printers, shoemakers, potters, goldsmiths… It would take long to list all craftsmen from a wide range of those grouped in guilds. The population of Banská Štiavnica was increasing; water-supply system was introduced, streets were paved and roads to nearby settlements were built, as well as a series of majestic buildings. The town became the third largest in the Kingdom of Hungary.

His Majesty is coming!

It was a significant event, when the husband of Maria Theresa, Emperor Francis Stephen of Lorraine, visited Banská Štiavnica in June 1751. He was fond of progressing natural sciences and Banská Štiavnica was the fastest developing scientific laboratory, where the outcomes could be implemented into practice immediately. Not only did his visit impress the local inhabitants very much, but also it underlined town’s good reputation in Europe.

The emperor who loved technology and education was enthusiastic about the study visit. This might have been important when he was deciding where to place a future technical education centre of the monarchy. By the decision of the emperor, in 1762 Banská Štiavnica became the seat of the first technical university in the world – Mining Academy. In a significant way this strengthened its position as a centre of mining, metallurgy, chemistry, cartography development and others.

The first established departments included the departments of chemistry and mineralogy. At the same time, the first professor was appointed – Nicholas Jacquin (1727-1817) – a Dutch native of Leyden and a famous European scientist. Other professors and departments followed. The Department of forestry was established a bit later, as mining was consuming a huge amount of wood and the hills around were totally deforested up to the southern areas near villages. One of the tasks was to supply wood as fast as possible. For this purpose the arboretum was established in Kysihýbeľ (now it is, unfortunately, closed to the public), as well as botanical garden. At first, Academy used to operate in several buildings in town. Representative area with school palaces and the botanical garden was built at the turn of the 19th and 20th centuries.

Mining Academy educated hundreds of top specialists. Having the Diploma of the best equipped mining centre in the world, you had doors opened anywhere in Europe. Students brought new energy and manners to the town. They were really honoured in Štiavnica and also had various privileges. Only few people know that the graduation ceremonial called stušková and the student anthem Gaudeamus igitur come from Štiavnica.

In the mid-19th century mining had been declining, so as the price of precious metals. World became “smaller” because of better transport and precious metals began to be imported from rich overseas mines. Precious Štiavnica metals mined with obstacles lost their competitiveness in the world market. Thus, under Austria-Hungary the factories build instead of former production in the town included The tobacco factory, textile factory, footwear and others.

For a long time, the image of Štiavnica had been improved by famous Academy; however, when Czechoslovakia was formed, Academy was moved to Hungary. The town stagnated. New stimulus for development came during socialism, with a motto: “I am a miner. Who is more?” Thousands of students came to build the famous “Track of Youth“ (Trať mládeže); gas, water supply or sewerage were introduced in municipalities. The regime of workers supported mining, although the yields were low. In 1970’s the Communist government decided to rebuild this dilapidated town. They reallocated a significant part of state budget to the reconstruction and in fact saved the town centre from collapsing.

Downfall continued when a new government was established in 1989. No wonder: the town is situated outside main roads, in difficult terrain surrounded by hills, factories cannot be built here and houses are under a preservation order… All this contributed to a gradual decay. Factories had been closed one by one.

Banská Štiavnica has been “resurrected” several times. Every time it was the result of resourcefulness, creativity and enormous commitment of people. The town has no preconditions for the emergence of large-scale industry, but tourism together with the fact that its genius loci attracts creative people, have a huge potential.
Adding Banská Štiavnica to the UNESCO’s World Heritage List was an important milestone in the development of the town. The subject of the entry includes town centre and technological monuments in its surroundings.

Another milestone was the establishment of an open-air mining museum which is unique in Slovakia. Protection of monuments played an important role, as it preserved the Štiavnica’s original appearance. Nowadays, Štiavnica is a picturesque town with still emerging small guest-houses, pubs and events. Their quality and quantity greatly exceeds the standard of small towns.

The paradox is that when the price of gold increased, gold mining was renewed in Hodruša – as the only place with renewed mining in Slovakia. Hodruša had been fighting long for its recognition under Štiavnica’s thumb, but its time did come.